Let’s look at anger in the Bible.  I think so many times people equate “Christian” with “wimpy pacifist” who can’t get angry or God will strike ’em with a lightening bolt; that’s not true at all.  And on the other hand, you have those who make jest of their anger by telling the tale of Jesus flipping over the tables–c’mon you know you’ve seen it on Pinterest.  Both are wrong…and both are just a little bit right.  Today’s post is part of my 31 Days series on Bible Quotes.

Bible Quotes: Anger in the Bible 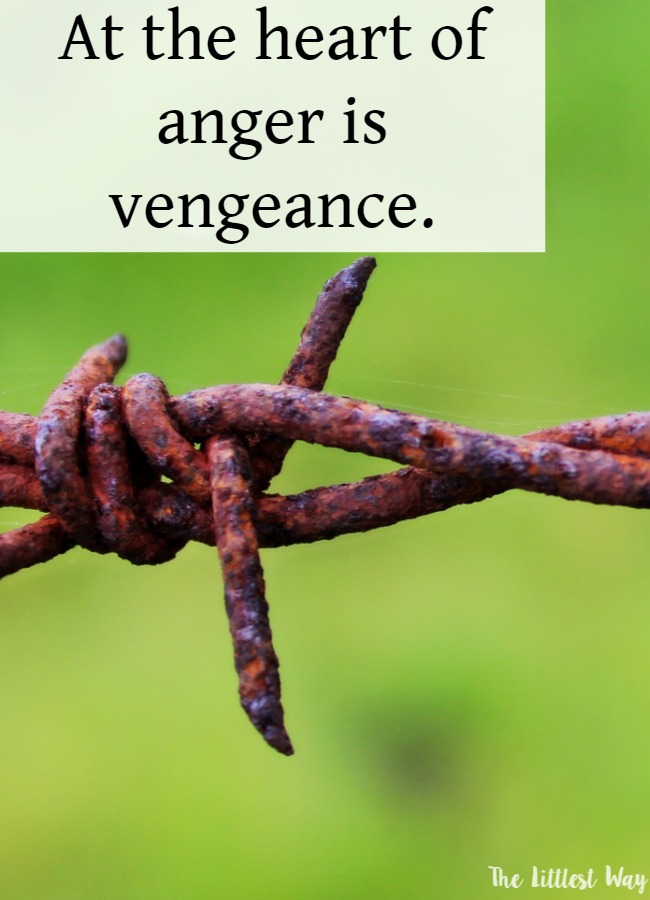 Father John Hardon states at the heart of anger is vengeance, so to find out what anger is let’s look at the heart of it–vengeance.  According to the Modern Catholic Dictionary, vengeance is “The infliction of punishment on someone who has done moral wrong. In this sense, only God has the right to avenge wrongdoing. He may delegate this right to those in legitimate authority, as St. Paul declares, speaking of civil rulers, that “the authorities are there to serve God; they carry out God’s revenge by punishing wrongdoers” (Romans 13:4). (Etym. Latin vindicare, to revenge, vindicate.)”

So at the heart of anger is the desire to get “back at” someone.  And if we’re toddlers we get back at someone by biting them and if we’re adults we take it Facebook.  We can already see the problem with anger can’t we?  It’s all about self…it’s pride with some attitude.

So those who think Christians can’t get angry or they commit a sin, are kind of right.  If we stopped and asked ourselves in the heat of the moment, “Why am I angry?”  I would bet one of the most common answers would start with pointing the finger at someone or something as if to say, “How dare you/it!”  Our anger would be unjust because it would be coming from a place of pride…and we’d want vengeance.  Yes, that has sin written all over it.

Those who think Christians have every right to get angry, angry enough to flip some tables because “What Would Jesus Do?” Don’t understand anger.  They are viewing it from a place of pride as well, “I can’t believe they would do that in the house of God!”  Hm, pointing the finger?  Or how about, “I’ll teach them a lesson and this will be the last time they mess up God’s house!”…their room…my car…the dinning room table…Uh Oh!  Oh boy do those words sound a little familiar.  Again, those thoughts and words reek of pride and sin.

But there is a just anger, “As a passion, anger itself is neither good nor evil (see Catechism of the Catholic Church, no. 1767). It can be noble if it is directed toward maintaining justice and correcting vice (Catechism, no. 2302). One can think of anger as a passionate desire to set things right in the face of a perceived evil. In the sense of noble anger, it is not about “getting even” with a person who may have hurt us, but about protecting one’s own good, the good of the community, and even the good of the person who inflicted the injury.”  Edward P. Sri  In other words, there is a right way and a right reason to get or be angry.  The obvious example right now would be a just and noble anger we should have against the scourge of abortion.  If there is no anger against these heinous killings of babies, there is something dreadfully wrong in that person’s soul.  If there is such a passionate anger in a person’s soul that they wish to kill the abortionist in return for the killing of babies, there is also something dreadfully wrong in that soul as well.

But that’s a bit off the topic here because most of us deal with anger in a million little ways through out the day; we don’t want to kill anyone, but man oh man…toys shoved down the toilet, brand new institutional sized bottles of shampoo dumped on the bathroom rug, a repair man that makes us wait all.the.live.long.day, and a school project forgotten until 10pm can bring out these waves of anger can’t they.  Pride, pride, pride, pride pride.  “Now I have to stick my hand in toilet water…Do you know how much money I just paid for that bottle of shampoo!…Don’t you know I have a million other things to do than wait around for you?…Now I have to get back out of the house to go to the store!”    Do you see those bold “I’s?”

Let’s stop.  At the first sigh of anger for you and me, whatever it may be: tightening shoulders, clenched jaw or fists, our voice goes up an octave…let’s just stop and offer a prayer.  If all we can muster is “Lord help me!”  which is pretty short, probably too short, let’s offer it five times for the five wounds of Christ and then…after we’ve determined what type of anger and where the anger is coming from…then say what we want to say…ask what we want to ask.