I mention that I use two Bibles (more honestly, but always at least two). One for daily reading and one for study. Recently as I was reading my daily Bible I came across a story and some passages that I knew I want to spend a little more time with. When I want to spend more time with a story or verse, I choose one of two ways–I either pull out my Catholic Journaling Bible or I pull out a composition notebook. 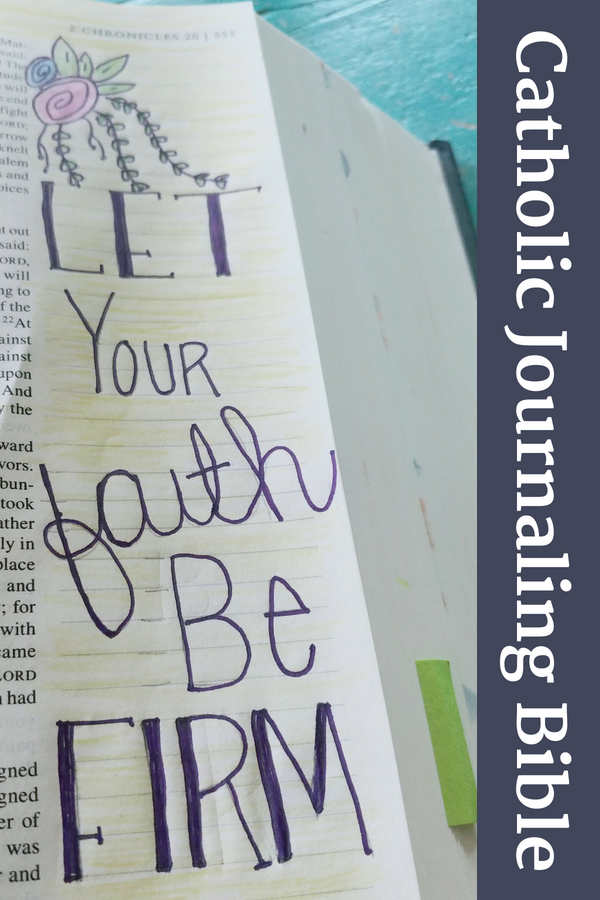 I read a story about Jehoshaphat headed off to war in 2 Chronicles 20 in my daily, One Year Bible. Early in the morning, as he and his men were getting ready to fight the Moabites, the Ammonites, and those of Mount Seir, the Scriptures tell us, “…he halted his men and said: ‘Listen to me Judah and the inhabitants of Jerusalem! Let your faith in the Lord your God be firm, and you will be firm.'”

He was preparing these men for battle and rather than list off all their previous accomplishments as a group or point out how amazing specific leaders or warriors were, he focused their attention on God. He told them to have a firm faith in God and they would be firm.

I would image a physical battle is similar to a spiritual battle in the sense that once it starts, it can be easy to get distracted. The confusion of the attacks, the chaos of the fight, and the fear; let’s not discount the fear. This wasn’t the first war they’d been in and wouldn’t be the last. Jehoshaphat knew the only way they had a chance was to be firm in their faith in the Lord so they could be firm in the battle, firm in their lives.

It’s almost as if he knew we’d need those words of encouragement thousands of years later.

But he doesn’t end there. Next, he appoints some to sing to the Lord and some to praise the holy Splendor as it went forth at the head of the army. “They sang: ‘Give thanks to the Lord, whose love endures forever.'” The Scriptures state he did this after consulting with the people.

Have you ever called a friend and laid out your fears and they told you to trust God and you said, “Yeah, but…All I think is…I keep thinking…But what about…” And the friend gives you something specific and tangible to do to chase the fear? I have. One time I called a friend with a laundry list of, “I’m afraid of…I keep thinking about…”But what if…” and she told me to make myself a fried egg sandwich because she said I needed a good protein for lunch. She told me after I made my sandwich I was to go sit on the driveway in the sun and eat my sandwich because I needed some sunshine for Vitamin D, warmth, and I needed to feel the breeze.

The making of the sandwich–gathering the food from pantry and fridge, cooking the food, and assembling the food. Going outside, sitting in the sun, eating my sandwich–all of this activity and thinking would be a distraction and a roadblock for the anxiety that was pushing hard and getting ready to tunnel deep into my mind.

So for the people who expressed their doubts, concerns, and fears to Jehoshaphat, he gathered a group of people to go ahead of the army and praise God.

And that would be a wonderful story if it ended there. But it doesn’t, it gets so much better!

The rest of the story is that when the men began to sing, the opposing armies began to fight…each other! “The Ammonites and Moabites rose up against the men from Mount Seir to destroy and annihilate them. After they finished slaughtering the men from Seir, they helped to destroy one another. When the men of Judah came to the place that overlooks the desert and looked toward the vast army, they saw only dead bodies lying on the ground; no one had escaped.”

When the men of Judah got to the battle, all the men were already dead, there was no battle for them to fight! And there’s more. When they went to gather their plunder, there was so much it took them three days to gather it all!

Read that story and apply it to your life. These aren’t stories mean for casual reading. The Scriptures state the Word of God is “living and active”–use it! Apply it and learn from it. In this case, when you’re headed into battle–every morning living and breathing in this world which is not our home, be firm in your faith in God. Sing praises to God, especially when afraid or anxious. Distract your mind and heart with thoughts of how great and good God is. And then go.

I wonder if we did this more, would we be in the throws of battle less?