I did it!  I survived the respiratory virus that caused pneumonia in two of my children, bronchitis-like junk in a couple more, ear infections in two of them, hives in two of them (on two of them?) and coughing, coughing, coughing from all of us…yes, for those keeping score, Anna finally succumbed.  But, It did not ruin my twenty-second wedding anniversary either. I chose joy, even though I wasn’t feeling it part of the time. I practiced the Laws of Emotional Strength ala Tommy Newberry and The 4:8 Principle: The Secret to a Joy-Filled Life

Today, let’s talk about what Tommy Newberry says in The 4:8 Principle: The Secret to a Joy-Filled Life

are the Three Laws of Emotional Strength. Please, do not let me lose you here! This is not new age, crazy, mumbo jumbo. This is sound teaching about our thoughts determining our feelings. Too often, we let our feelings determine our thoughts–wrong, wrong, wrong. 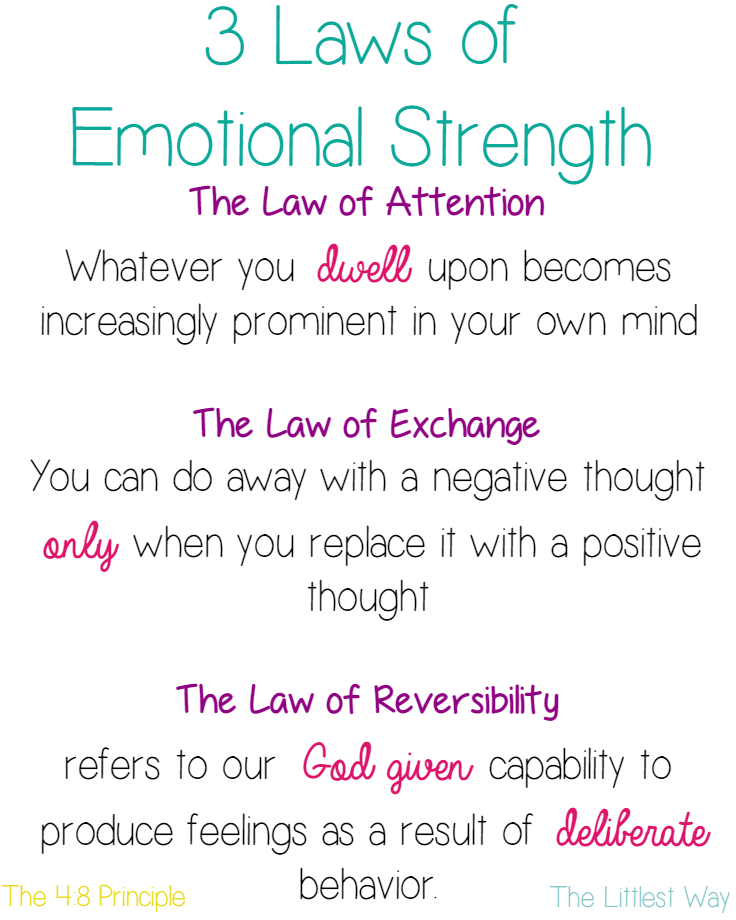 Let’s talk about what Tommy calls, The Law of Attention.

I mention in my “Hi There” section, I used to use my mind as a garbage dump. I watched whatever, read whatever and listened to whatever. I took it all in, and then wondered why I was scared, depressed, angry and confused.

In The 4:8 Principle: The Secret to a Joy-Filled Life

, Tommy Newberry defines the Law of Attention as “Whatever you dwell upon becomes increasingly prominent in your own mind…You will always feel what you dwell on.” My garbage dump of a mind was scared because I watched and read scary things. I started reading sensationalized crime magazines at a young age. I grew up in the boom of true crime television shows–murder mysteries, and “What Happened to…”

I was depressed because I read depressing things. I am speaking from my experience and there is a bit more to that statement and my past depression, but the bottom line is…I fed the depression. A steady diet of sad stories, that maybe normally do not cause the average person to think twice after they finished reading or hearing it…I would dwell on it. I would examine every sad aspect and emotion of the story. It was almost as if I became a part of the story if only an outside bystander. My heart broke with news of children suffering, women being harmed and the overall plight of a fallen world. I lived in a constant state of brokenness–brokenhearted–broken soul and broken mind.

Fear, worry, depression, anger and anxiety took the prominent place in my thought life which led to my words.  I felt “bad” so I spoke words that supported that.  My mouth was a steady stream of negativity and that fed my mind.   Ay Yi Yi, what a vicious cycle!  The Psalmist says, “Let the words of my mouth and the meditations of my heart be pleasing to you, LORD, my rock and my redeemer.” †Psalm 19:14  These words come from King David, a man after God’s own heart…who also committed adultery with Bathsheba and killed her husband to get him out of the way and cover his sin.  And he’s asking God to let his thoughts and words be pleasing to Him.  He didn’t dwell in the pit of wrong thinking.  You’ll find in the Psalms his confessions and his sorrow, but not his dwelling in that place.  King David could not be effective for the kingdom of God if his thoughts and words were constantly about his mistakes, his sorrows and his sins.  He would have never found the joy of the Lord that causes him to exclaim with utter delight throughout the Psalms.  He wrote the first Self Help book and it’s filled with his remedy for wrong thinking…filling his mind with the good things of the Lord and then meditating on them…day and night. †Psalm 119

It took me some time to realize, God was not keeping me in my fears…I was; not that I thought He was, I actually never considered God’s influence or help at this point.  God was not putting sorrowful thoughts in my mind…I was force feeding them to myself; again, not that I thought He was, I never considered that He might care about my thought life.  And God was not reminding me of my past sorrows and sins…no, that came from somewhere else; Now, I did think that was God. 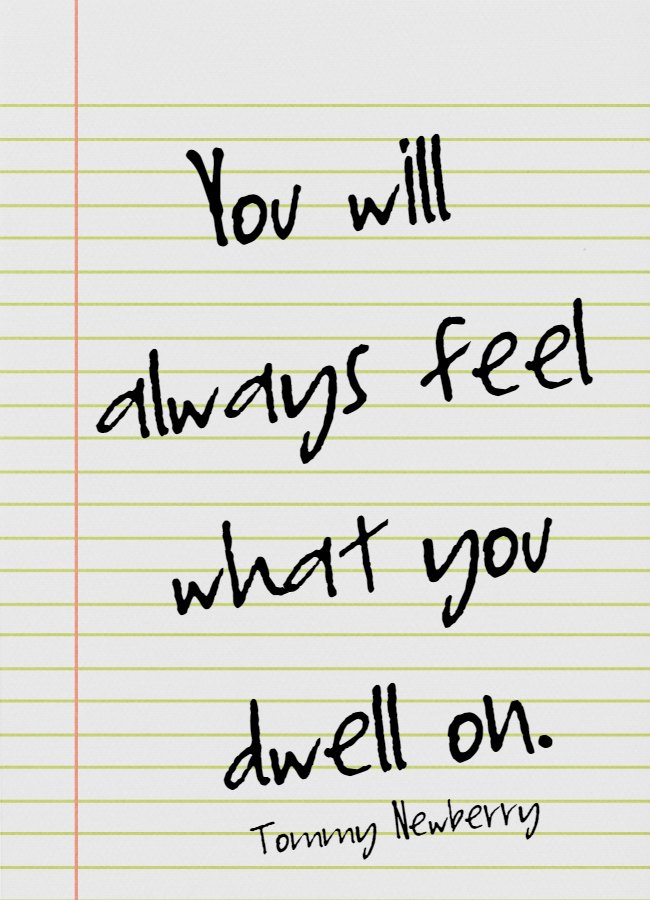 What captures your mental attention, what do you dwell upon…and is it a bad habit you need to break?