It’s here, Holy Week in the Church and in our Lent Devotional for Women. This is the most solemn week of the liturgical year.  I don’t know about you, but there is a tenseness in my heart this week.

In today’s Epistle (I attend the Traditional Latin Mass so my readings may be different from yours.) from the Book of Isaiah, the prophet states, “The Lord God hath opened my ear, and I do not resist; I have not gone back.”

Immediately I thought of two things: the first, when a baby is baptized in the Traditional Latin Rite, the priest takes a little spit, touches the ears and nostrils of the baby and says, “Ephpheta, that is to say, Be opened, for an odor of sweetness. Be thou, devil, begone; for the judgment of God shall draw near.”

This rite comes from Mark 7:33-35 when Jesus healed the deaf-mute: “And taking him from the multitude apart, he put his fingers into his ears: and spitting, he touched his tongue. And looking up to heaven, he groaned and said to him: Ephpheta, which is, Be thou opened. And immediately his ears were opened and the string of his tongue was loosed and he spoke right.” (The Rite of Baptism)

The second thing that came to my mind was the scripture about a dog returning to his vomit. (Proverbs 26:11) And before we get any further in this reflection, if ever there was a time to stand in agreement and let out a big “Amen!” it is now girls.  I do not want my faith life to be compared to a dog returning to its vomit!!

I love that passage from Isaiah I quoted above.  There is a daily affirmation contained in those few words.  “I do not resist God.”  That is a powerful statement!  What if we repeated that affirmation to ourselves this whole week? 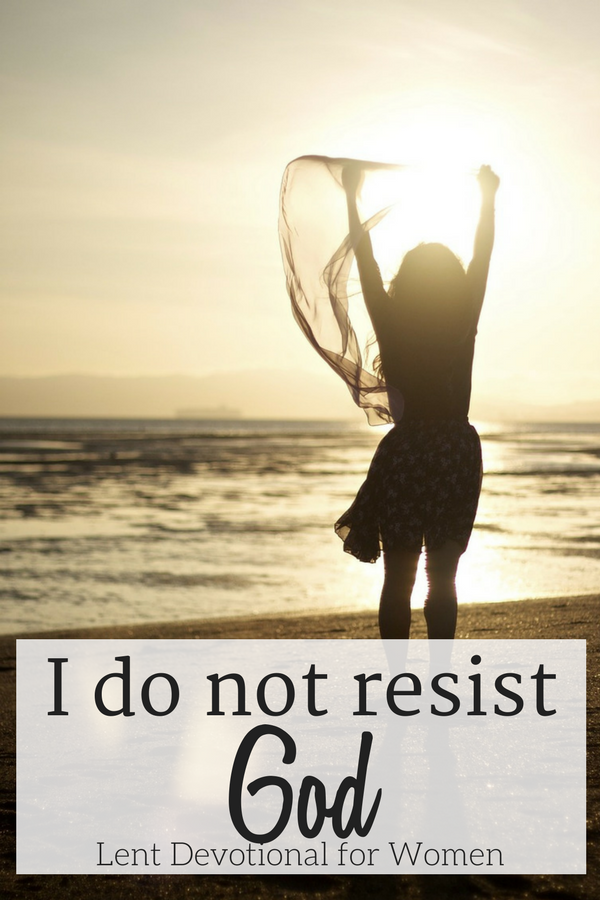 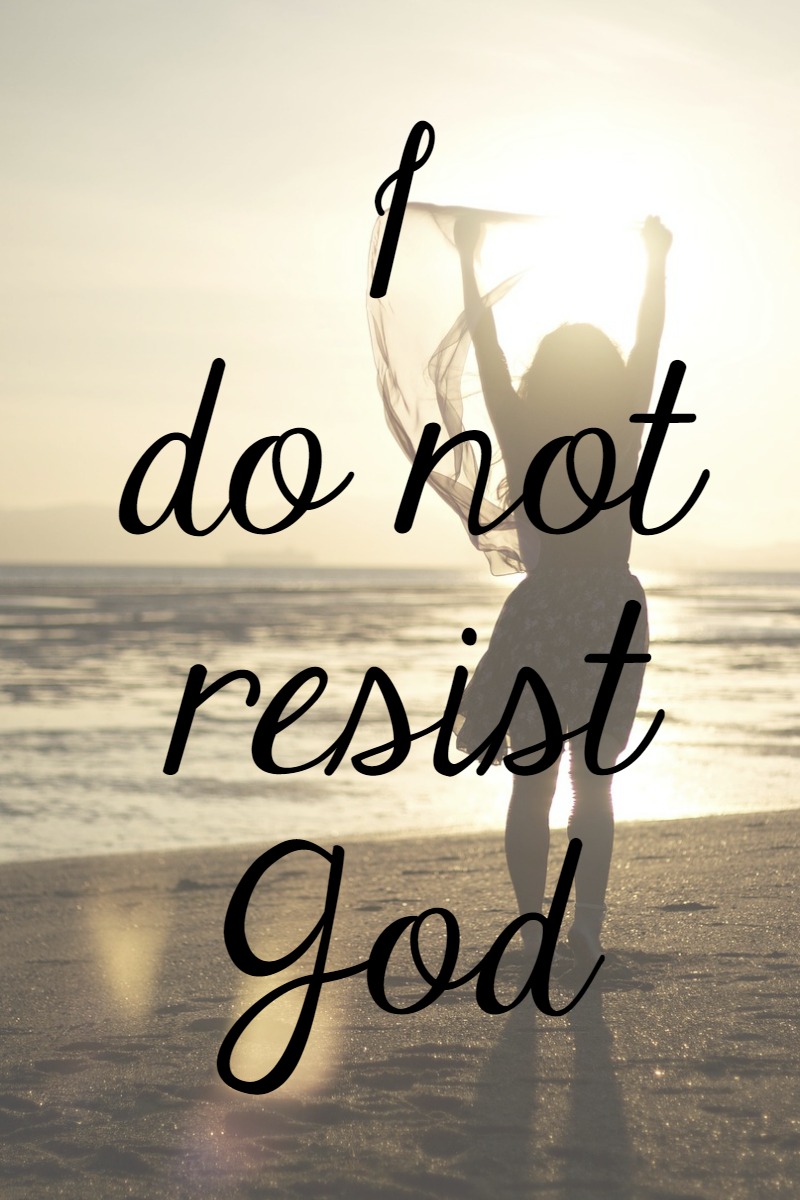 I’m just mentally running a list of people, places, and circumstances where I could, and probably should use the affirmation, I do not resist God.

The hard part is, it’s fairly easy to resist Him at times. Like when we have a disagreement with our spouse and the Holy Spirit gently urges us to be the one to make the first move toward reconciliation. And we think, “I’m not making the first move. I wasn’t in the wrong!” Or we think, “This will pass, there’s no need for an apology, it’s not that big of a deal.” Or, our spouse apologizes and we decide we’re going to carry that pouty grudge just a little longer.

All of the above? That’s resisting God friends. Can I get an OUCH!?

What about with our children? Like when we totally lose everything we’ve got in front of them. They may have misbehaved, rebelled, talked back, made bad grades, left 13 cups, plates, and bowls in their room…but we’re bigger and better than losing it on them. OOF!

Look, we’re also human, it happens! But it’s what we do after it happens. Using God as an example, He is all about parental relationship; our child may have done something wrong, but so did we.

As a side, one of the most important lessons I took from the book, Hold On to Your Kids, was that rebuilding the bridge is always the parent’s responsibility. Not only are we older and (should be) wiser, but we also set the example. And the example is, there is rarely a time in life when saying I’m sorry won’t reopen communication and repair heartstrings.

Now what about those holy nudges spurring us on, what about when we’re scrolling through social media and just start click after click even though–the laundry needs to be folded, the floor swept, our Bible read, our children snuggled, our husband loved on, etc. Oh my goodness! It might feel like I’m coming at you, but trust me, first, it’s in love, and second, girl, I am right there with you! This is hitting hard right now.

And we know, we feel that little nudge, but we ignore it because honestly, sometimes scrolling is more fun than folding, washing, ironing, basically being actively involved in the present tense of our daily life.

Those are just a few examples when we know; we know when we are resisting God. Let’s make a conscious effort this week to respond, rather than resist God. Make this a daily affirmation, even if for this week only.

Here’s what I want to say, let’s finish strong! I want to use the example of standing at the finish line when my daughters ran a 5K. Inevitable, when the young kids–our young at heart adults, would see the finish line, they would sprint all out, giving every last bit they had! Let’s do that, let’s challenge ourselves for the next 5 days to respond to God in all the various ways and places He asks us to.