In our Lent Devotional for Women, we’re getting closer to Easter, but to get there, we have to go through the Passion and death of Jesus. And the Lord knows, if we could get to the glory of Easter without the suffering of the Passion, we’d be there in a minute!

But first…You know we’ve been talking about love, friendship, and prayer in this Lent Devotional for Women, let’s talk about listening today.

Hebrews 3:15 states, “Remember what it says: “Today when you hear his voice, don’t harden your hearts as Israel did when they rebelled.”” So my question for all of us is, do we hear His voice and harden our hearts?

Lent Devotional for Women: Harden Not Your Hearts 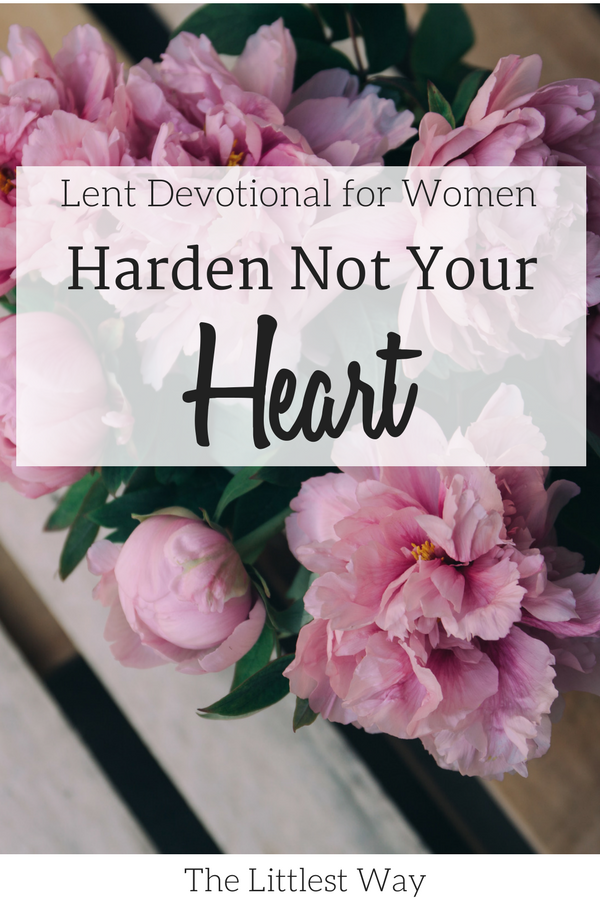 I asked the question above about whether or not we’ve heard the Lord’s voice, but hardened our hearts. I’ll go ahead answer for all of us…Yes! And do you know when it’s easiest to harden our heart? When the Lord is speaking through someone else. “Well, that’s not God,” we protest! “That’s just your opinion.”

Even though we protest when someone offers correction, discipline, or even just straight-up common sense, we know don’t we? Dang it! We know. We know when God is speaking to us through another person. And we know it, but don’t want to admit it, we get angry!

We know when we’re doing something that’s not good for us and that correction, from someone else, just grates on us and convicts us and we don’t like it! Not one bit!!

God came to give us abundant, joy-filled life and if He’s correcting us, it’s because what we’re doing is getting in the way of His ultimate plan for our best life! Goodness! Why do we do that?

Why do we get in the Lord’s way all the blessed time!

Have you ever had someone who loves you immensely come to you and say, “I don’t think this (whatever it is) is a good thing for you.” And if we’re not listening, if we’re hardening our hearts, what do we say? “That’s just your opinion.”

They know…we know…God knows…And yet we ignore them like we’re the biggest, baddest brick wall they ever talked to. Or, we defend ourselves, even though we all know that we all know! Talk about an elephant in the room!

But we won’t admit they’re right. We’ll keep doing what we’re doing just to show them…spite can be a dangerous weapon that more often than not hurts us far more than anyone else.

So why do we harden our hearts? Why do we ignore the voice of the Lord, either audibly through one of His beloved children or interiorly in the quietness of our soul? This is a one-word answer, pride.

We don’t want someone else to be right–even God because we think it will mean we are wrong. We also don’t want anyone telling us what to do–even if it’s God Himself in the voice of someone who loves us. We don’t want to consider we may have made a bad decision or a poor choice. We don’t want to stop what we’re doing and if we do want to stop, we want it to look like our idea.

Listen, for the most part, taking into account the parties involved are healthy–spiritually, emotionally, and mentally, no one wants to approach someone else and tell them what they are doing may not be in their best interest. No one is walking around or sitting there waiting to be God’s mouthpiece to correct someone they love. They don’t want to possibly damage the relationship, but they’ll risk it if the consequences of not saying something are far worse.

This topic for our Lent Devotional for Women ties in so well with the other frequented topics of prayer, love, and friendship. If someone has come to you during this Lent with a caution, a warning, even a correction, please, consider their reason.

Consider how your soul felt when they were speaking to you. Consider their bravery in speaking the truth in love. Consider if it was God instead of a man, would He be saying the same thing?

Also, another thing to consider, our response. Why are we responding so defensively? Consider why we won’t listen, why we harden our heart, why are we so attached to this “thing” others are questioning?