Read what the Scriptures tell us about Josiah, “Never before had there been a king like Josiah who turned to the Lord with all his heart, soul, and strength…and there has never been a king like him since.” 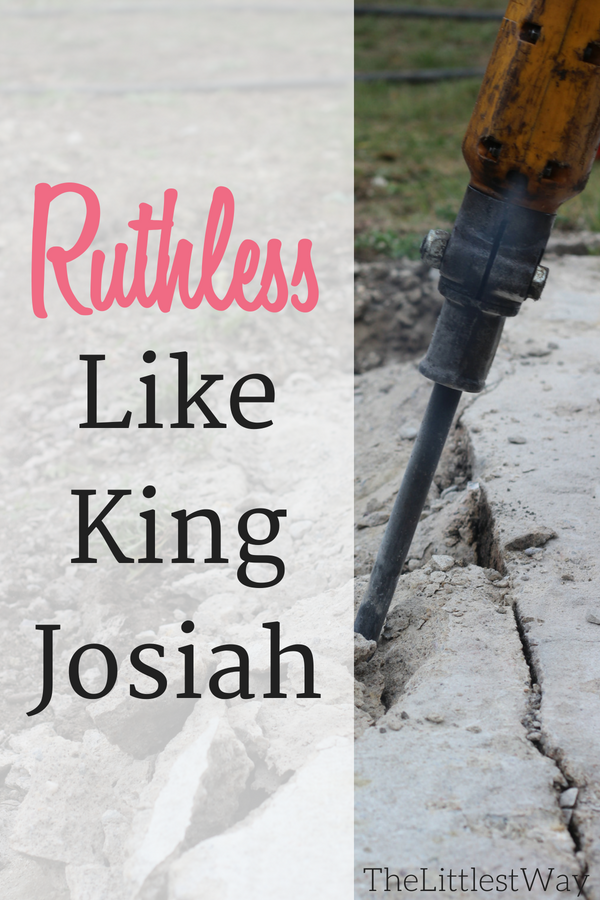 I went through the passages before that one and pulled out some adjectives used to describe what King Josiah did:

::He told the high priest and leading priests and Temple gatekeepers to remove all the utensils that were used to worship the false gods.
::He then burned all these things and had the ashes carried away.
::He removed the Asherah pole and burned it then ground it into dust and scattered it on the public cemetery.
::He tore down the houses of the shrine prostitutes.
::He defiled all the pagan shrines.
::He destroyed the shrines at the gate entrance.
::He defiled an altar used for sacrifice to a false God.
::He burned the chariots dedicated to the sun.
::He tore down false altars on the palace roof, smashed them to bits, and scattered the pieces.
::He desecrated another pagan shrine.
::He smashed sacred pillars then desecrated these places.
::He tore down a pagan shrine, crushed the stones used into dust, and burned the Asherah pole.
::He demolished pagan shrines.
::He executed the priests of the pagan shrines.
::He burned human bones on the altars to desecrate them.
::He exterminated the mediums, phychics, household, and other kinds of idol worship.

King Josiah was not playing around y’all!

Now, remember, I am not a theologian and I am not interpreting the Scriptures. I simply read through and underlined all the things it said King Josiah did in relation to the pagan temples and idol worship in that one day’s reading. If he turns out to be an awful, rotten, pagan worshipper in the end–don’t tell me! I’ll get to it in that day’s reading.

In my daily reading, I’m not studying Old Testament Kings or pagan practices or the Old Covenant. I simply read, write down what I think in the margins or a sticky note, and underline passages that make me think. Then, I go back over those passages underlined with my favorite highlighter.

Back to this post…I’ll say it again, this King was not messing around! He knew the only way to overcome and get rid of the enemy was total destruction. Look, the enemy is out to destroy us. That’s when we stand our ground and say, “One of us is going down!”

So how do we destroy the enemy? 2 Corinthians 10 has some guidelines.

1. We demolish arguments that set themselves up against what we know is the truth of God.
First, we have to learn what God is like, Who He is. I do this by filling out a Character Sketch printable about God. Anytime I come to a verse that describes something about God, I write it down.

2. We take every thought captive and make it obedient to Christ.
We learn to recognize the lies the enemy tries to fill our head with and combat them with the truth–affirmations.

3. We don’t boast about what we have done or can do; only what God has done and can do.
The Psalmist frequently states he remembers the things the Lord has done or he recalls the goodness of the Lord. Thinking about God and His goodness will certainly take our minds off of ourselves.

Is there some sin or bad habit you’re struggling with? Have you ‘tried everything’ and are still struggling? Read back through that list of adjectives used to describe what King Josiah did and compare what you’ve done. Have you been as ruthless as him or just kind of swatted at it like a fly?

« The Daybook Journal Vol 17
You Are Smart Enough »