Years ago I instituted a weekly holy hour for myself. I was a stay at home momma of one, soon to be two, then, three, and eventually seven little souls! I didn’t go to the gym, the salon, book club, or a Bible study. There were a couple of reasons why I didn’t leave my little home filled with children: finances, an overactive imagination of what could possibly happen to my children in the care of a babysitter, being an introvert, attachment parenting, exclusive, on-demand breastfeeding, being a semi-recluse, and living out in the country. All that being said, my soul, my very self needed just a little time and space. So I found a creative way to spend one hour alone. 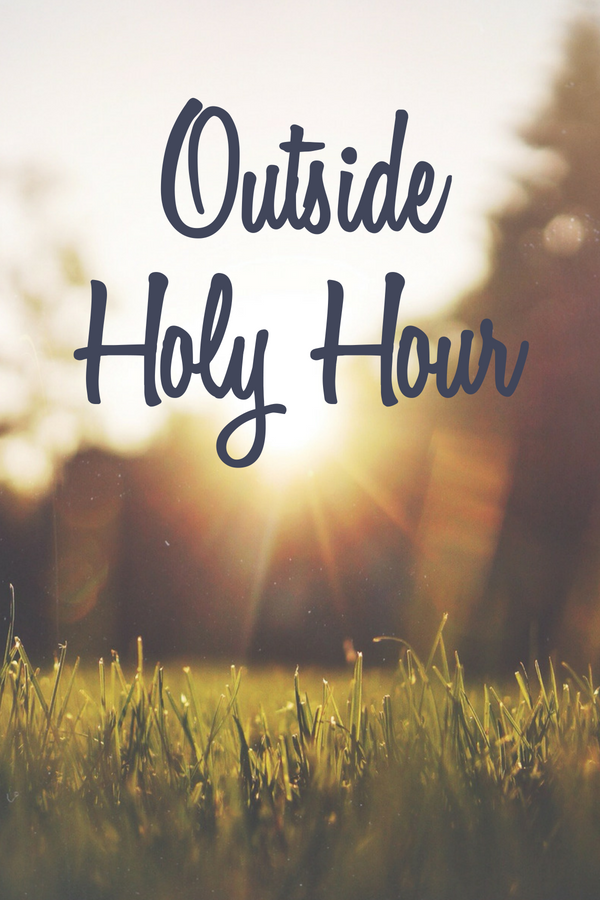 I offered to start doing the mowing. At the time, we mowed about 2.5 acres and eventually almost 5 acres with the occasional adventure of mowing around the edge of the field with the tractor for fire protection. After my first attempt, I was surprised at how much I enjoyed that solitary hour! I also knew I needed more of it, regularly.

I mentioned solitary and that it was! I was on a loud, dangerous machine. I couldn’t hear a baby crying, a husband asking questions, a toddler melting down, a phone ringing, a dog barking, the television…nothing. Unless there was a serious emergency, which there never was thanks be to God, I was on my own. Occasionally I would glance toward the porch and if the, then baby, was getting to his or her breaking point, Chris would be standing there bouncing or walking the unhappy one until I made one last round, put the mower away, and had time to shower and grab a cold drink before taking the baby.

In addition to the quiet, it was, for the most part, a mindless activity. I got on the mower and started going around and around. Well, before I started the actual, blades down mowing, I offered a little prayer.

On one of my very first mowing expeditions, I hit a turtle. It was super traumatic for the both of us! Him more than me obviously. The next time I went back out to mow I said a little prayer to St. Francis of Assisi, patron of animals. “Good St. Francis, lover of animals, I am too. Please do not let me run over a bird, bunny, frog, squirrel, or turtle. But, if you want me to run over a snake and chop it into little bitty pieces, I’m ok with that. Amen.”

Speaking of prayer, that’s I spent many mindless rounds on my lawnmower. Aside from my usual, “Please don’t let me kill anything except for a snake” prayer, the rest of that prayer time was spent “freestyle.” I had no agenda, I just talked, or bargained, or argued. I conversed with my Father. I tried to listen but He would probably say I did most of the talking. That’s ok. God met me where I was, an over touched, introverted, stay at home momma on a loud, rumbling mower. It worked. The reasons, the setup, the conversations. After a cold drink and a hot shower, I was usually over-joyed ready to step back into my all-encompassing role of momma.

And I have to share another benefit of my mowing holy hour, the completion rush. Yes, it was interruption free and mindless, but the completion aspect probably brought me the most joy. How many of my other duties could offer such a sense of accomplishment? There was always one more cup, more laundry, more crumbs, more…more…more. There still is to this day, thanks be to God. But mowing? At each turn, I could see the already cut grass. And at the end of my mowing session, I had a freshly cut yard. I had accomplished something tangible that had a clear beginning and end.

As I share this story I just thought of one more benefit. Chris had an entire hour to be “THE dad.” I wasn’t available for him to hand a fussy baby off to or, as was the case more often than I like to admit, I couldn’t swoop in and take the fussy baby. They had to figure things out on their own for that hour and that was a tremendous blessing for us all. Chris became more confident as a father, the baby learned momma wasn’t the only one who could do this or that, and I learned it wasn’t always going to look “my way” but that didn’t make it wrong or dangerous.

I write this to encourage you to do the thing. Take the holy hour you need based on your finances, personality, and family dynamic. It will make you a better wife and momma, I promise you. It will make your husband a better daddy and your children will appreciate a renewed, even if only slightly, momma.