With just a little over a week officially left of my 31 Days of Bible quotes, I just want to lay it out…or at least most of it out for; how Bible quotes and I met, how they saved my life–along with other things, but they for sure played one of the largest roles.  I want to share how when I wander too far away from my Bible, I start to feel upset, unsettled and get really nervous.  And how I have to keep using them, even now, because the enemy is prowling about..just waiting.

Can we just please say a little prayer first?  This is hard and I’m feeling a little emotional and vulnerable. 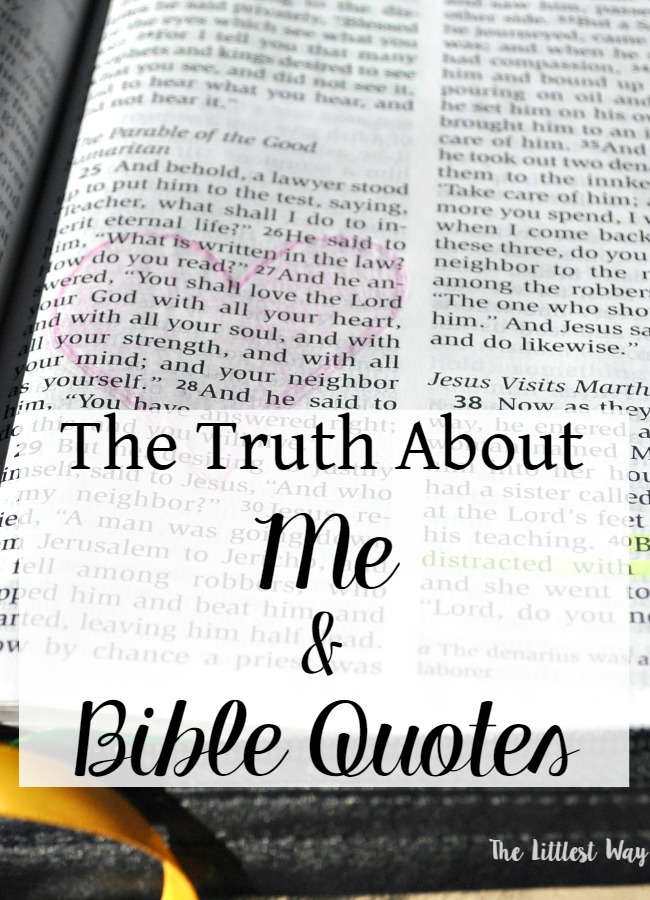 I’m not sure of the dates but I do remember the final trigger, the last straw and any other metaphor you know and want to toss in.  Chris and I had stayed up watching a movie.  I already had to be careful about what I watched; the slightest thing like a character dying of some disease could set my mind off on some wild “What if” tangent.  This movie was a Jamie Foxx move where he plays a Cello or some big stringed instrument; I don’t remember the name of nor do I even care to Google it.  I don’t know what happened but something switched on in my head and I had to stop watching the movie.  I felt like I couldn’t breathe, my heart was going to burst and my head explode while I ran around like a mad woman.  I’m still not entirely sure what exactly happened–was it a certain scene or what?  I can tell you without a doubt I was full on attacked by the enemy that night.

In the past I had struggled with some depression, some anxiety, some fear–well, lots of fear.  But some how managed to “keep on keepin’ on” through it.  It would flare up, die back down to a simmer, flare up, die down…It presented itself as fear of Ebola, a heart attack and whatever the latest health report I had seen on television or read in a magazine;  I worried I had or would get one of those ailments or diseases.

But this time, it went straight for my mind–maybe it was the influence of the movie, maybe the enemy just got tired of dancing around and went for a head on attack?  And I remember one time very clearly, right in the thick of the storm, shaking my head and realizing, it always was my mind, just cloaked by fear of some phantom physical ailment.

I prayed, cried, read, researched what could be wrong with me, prayed, sought assurance, cried, worried, had anxiety attack after aweful anxiety attack, sought reassurance…and I mean on and on…can you imagine how I must have wore Chris out?  Or my sister or my soul sister?  And I didn’t even talk to the sisters too much about it because I was afraid of what they would think or do.

The days and nights were long as I clutched my rosary, gripped a crucifix, held on to the edge of my bed, paced, got on my knees, scrubbed the tile in my shower, walked, cried, worried, fretted, clung to Chris as my life line and was scared of my own shadow.  My heart raced, my head felt like it was going to explode, my body ached, my head ached, my heart hurt,  my eyes stung, my stomach was upset.  I literally felt like I wanted to crawl out of my own skin.

Every bad thing I had ever heard, seen, read about or done consumed me.  I thought I was, would or could do any of those past memories or sights and sounds from scary and evil stories I had read or seen on television.  If you think of a scary story you have heard in your life that you thought “I could never/would never…” I was afraid I could or would…

Short break–I have to believe this is reaching someone because I cannot imagine any other reason why I was led to share this junk.  If this is for you–I am praying for you because Oh My Gracious–I know.  I do not even like looking back at this.  Remember the other day in Bible quotes About the Devil when I mentioned that quote about if you’re looking at the devil he’s looking at you?  Yeah that…

So physically I checked out fine by any and all doctors I saw; that left mental.  I started researching even more on the internet, scared of even Googling half of this stuff because

A)I was afraid of what I might read and

B)I was afraid if anyone ever searched my Google history they would think…who even knows what they would have thought?!??!

Late one night, I read about Cognitive Behavior Therapy and determined that’s what I needed.  Another on-line search pulled up two local counselors who listed that as one of their services.  The first one I called either couldn’t get me in or no longer accepted my insurance or something, so I called the second; a Providential twist.

At my first appointment, I timidly told him what had been going on.  A couple of appointments after that I laid.it.all.out.  Everything…every scary thought, fear, concern, “What if’s” and “Please God no!”  I was more scared of myself than what he would think of me at that point.

I’m not sure if it was the first appointment or not, but he started asking me about my “weapons.”  I had no idea what he was talking about…none.  He started quoting Scriptures and asking me questions about them.  I pretty much still had no idea what he was talking about.  I mean I had read my Bible some, but “used” it, knew it, could quote from it or tried to memorize it…nope.  He started talking to me about praise music, gratitude lists and memorizing Scripture.  And you know what, I was barely hanging on and holding it together at that point…for honest to goodness real.  He literally was my last hope so I listened and did what he said.

Let me give you an example of how bad I was.  One of the verses he encouraged me to use as a weapon was, “I have the mind of Christ.”  I was afraid to even say that verse because I thought, “What if I start thinking I’m Jesus since I have His mind?!?”  I know…I know…

I knew where I was…I knew I couldn’t stay there.  So I did what he said, I read my Bible, I wrote out verses to put near my kitchen sink, on my bathroom mirror, in my purse.  I started listening to praise music.  I listened to Kari Jobe and Third Day.  I read three books aside from my Bible that had a huge and lasting impact on my mind: The 4:8 Principle, Searching for and Maintaining Peace: A Small Treatise on Peace of Heart and Battlefield of the Mind.  I started taking pictures.  (The Year I Needed a Hobby)  I cleaned my old tiled shower a lot.  I didn’t run away from these attacks, but I didn’t stop to check them out either.  When they would begin, I would start quoting Scripture to myself, I would get on my treadmill and listen to praise music while I walked, I cleaned my shower, grabbed my camera and took a walk with the kids…anything to move my myself forward.  I also took on the focused attitude that if something or someone couldn’t help me, then they could possible hurt me.  This might sound selfish, but it was and still is self preservation.

Let me explain that last one.  If listening to a certain song didn’t make me feel positive, inspired, loved, hopeful…I wouldn’t listen to it.  Same for watching something on television…you can imagine how much television I watched/watch.  This intention included being around people.  If a person complained, gossiped, talked about scary things or was just plain ‘ol negative, I couldn’t be around them.  It would have been like sitting a recovering alcoholic belly up to the bar.

I continued to work closely with my counselor.  I also sought spiritual direction with a holy priest who made me laugh.  This death grip of fear, worry and anxiety, took all my joy.  He knew I needed things to laugh at so we laughed at bad ’80’s music and mullets sprinkled into spiritual direction.  He counseled me constantly on how much God love me…everything we talked about would circle back around to this fact.  All of the above was a definite process and it took a couple of years until I felt like I could actually breathe.

I still struggle occasionally if I don’t take care of myself.  If I make one too many clicks around the internet, watch something I shouldn’t, listen to something I shouldn’t or spend too much time with certain people.  I am especially sensitive to anything that has to do with mental illness–that is probably one of my biggest triggers…and lack of sleep.

Whew!  That was a lot to write out and probably a lot to take in as you read.  Let me tell you something.  This post has been sitting here for a couple of days.  It’s taken me a couple of days to write.  Then I wanted Chris’ approval before I published it.  I read it to him yesterday evening and planned on scheduling it last night…Leo needed me instead.  So I woke up first thing this morning to clean it up a bit and hit publish…my computer was D.E.A.D.  The computer repair man told me hard drive health is rated 0-100%  My computer rated 0%.  He was able to get it into some type of recovery mode so we could transfer files off of it.  He wasn’t sure how long that mode would even work.  As I was rushing out the door to take him my external hard drive, I dropped it on the floor and it broke!  What in the world you all!?!!  Thankfully it still worked, although it’s compromised.

This post is brought to you by Chris…and my new laptop.

Have you checked out my new Bible Journaling Tips, Inspiration and Permission book?  Oh, please do!  I know you’ll love this valuable resource of “Why and How” to start Bible Journaling, plus a yearly reading plan, a pretty printable and more!

Books That Helped Me Mentally/Spiritually

The 4:8 Principle: The Secret to a Joy Filled Life

Searching for and Maintaining Peace: A Small Treatise on Peace of Heart

Battlefield of the Mind