In our Lent Devotional for Women today, we’re still considering love, but I think in order to understand love, we need to take a minute to look at the opposite of love. You might be thinking ‘hate’ but I want to consider “despair.”

Think of two men in the New Testament, one who exemplified love and the other, despair. Did Peter and Judas come to mind?  Good, because that’s who I was thinking of. First, before we start digging deeper, make the decision right now, even if it’s based on limited knowledge of the two; who do you want to be more like? Peter or Judas?

Peter, who loved with everything he was, fell, and then loved even more? Or Judas who loved, and fell, and never to get back up again?

Let’s look at the difference between these two, close, personal, friends of Jesus.

Peter eventually got to the point, granted, a very low point, but he got to the point where he realized his love was weak and human and absolutely fallible. And at that point of utter self-knowledge, he wept. Tradition holds he wept so much and with such remorse, his face was grooved from the bitter tears.

But! Peter got back up! And when he got up, he trusted in the love of our Lord, not his own love. He saw who he was, but more importantly, he saw who God was!

And Judas? Well, poor Judas couldn’t get over himself; he couldn’t get past himself. Judas could not get past the pride of knowing how far he fell. Yes, there can be a form of pride that magnifies our weakness and not our strengths.

It DOES sound like something the enemy would use against someone to defeat them and drive them far away from the love and mercy of God!

Instead of trusting in the Father’s love, Judas despaired. This is why I want us to consider despair as the opposite of love. Love brought Peter back to our Lord, despair drove Judas far from our Lord.

“In this world, blessed by divine love and grace, there is never need to despair.” –Fr. Charles Hugo Doyle #lent #lentdevotional

There are two glaring examples of disciples who messed up BIG time in the love department with Christ: Peter and Judas. And we know how the story ends for both of them. Judas couldn’t forgive himself while Peter accepted Christ’s forgiveness. Do you see the difference?

Judas focused on himself and what he had done while Peter focused on Christ and what He can do. #lent #lentdevotional

Here’s a Lent Devotional for Women confession, there was a time when my sins felt huge and soul-crushing; I was in despair. And the more I thought of myself, the greater my despair. (And I am not even exaggerating y’all).

One day it occurred to me–I still vividly remember the day by the way. I was sitting on a huge rock while Chris was clearing some brush at his dad’s land. The realization hit me, Peter didn’t walk around always introducing himself as “Peter who denied Christ three times.” He may not have been able to forgive himself at first, but he allowed Christ to forgive him so he could at least function in his day to day.

Not only was Peter able to receive forgiveness and forgive himself so he could function, he went on to lead the other Apostles and spread the Good News of Christ! Wow! It’s easy to see why the enemy would have wanted to keep him in a state of despair.

Peter was able to continue the life entrusted to him and his mission, which was to love Christ and bring others to Christ so they could love Him. (John 21:15-18)

When we are in despair or even headed down that road, the enemy must be doing the happiest of all happy hell dances!!

I realized it wasn’t God keeping me in this state of despair, it was the enemy!

God’s purpose is for us is to know, love, serve and share Him. Keeping me in despair would defeat every.single.one.of His plans for my life! 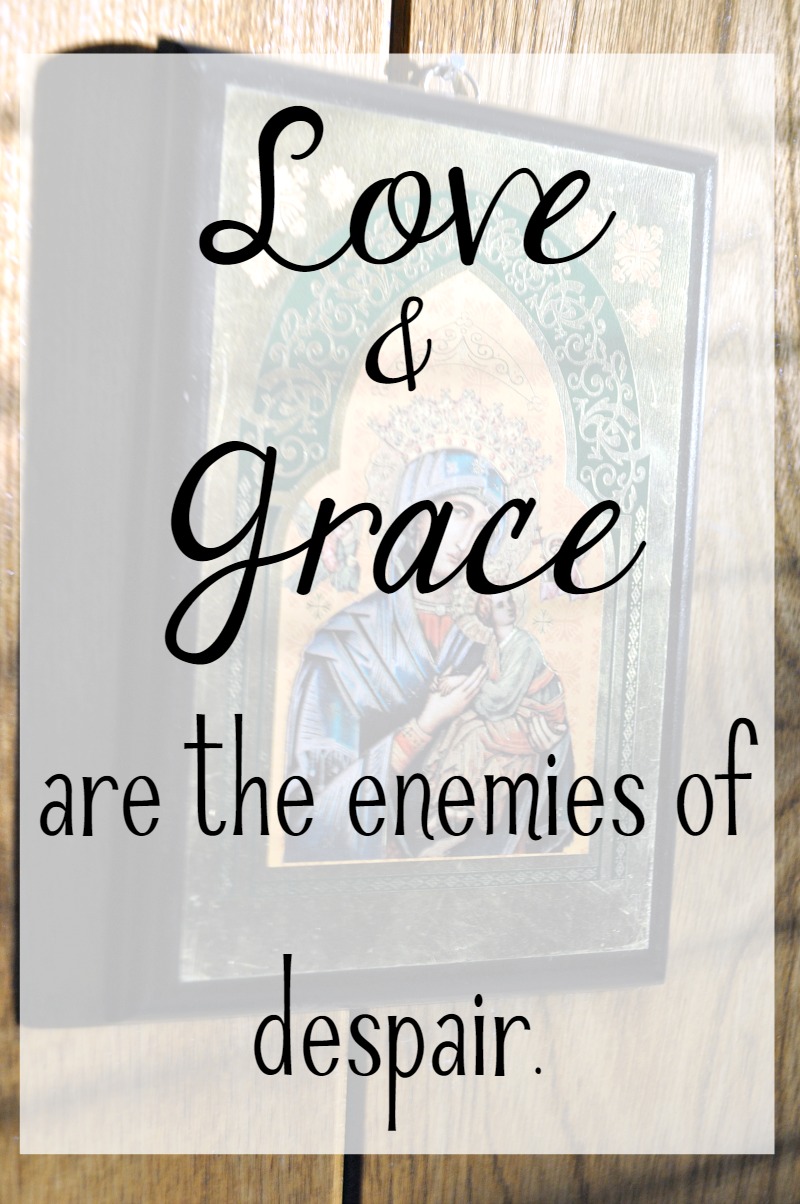 Let’s take a look at the qualities and differences of love and despair and let’s do it by examining our conscience. No that was not a trick, that’s where it begins, self-knowledge and then how we react to what we find out about ourselves. That my friends will be a great indicator of how we will react to others, but more importantly (I kind of feel like I say ‘more importantly’ more than I should?) how we react to God when we come to know ourselves.

What do you need to forgive yourself for right now?

What unforgiveness are you carrying around that is affecting your ability to love Jesus and be loved by Him?

When was the last time you went to confession?

When was the last time you just Adored Jesus and let Him adore you?

Click here for all the Lent Devotional for Women posts.