My one word for 2019 was grow and I cannot wait to tell you how much that one word grew me! First though, as I was rereading that post from last year I realized God up and changed my one word last year too; I had forgotten that fact.

See, this year I chose the word delight for my word for the year. And two days before the end of the year, in the middle of Church, I knew that my one word needed to change. Part of what tipped me off was that my new word touched something deep within me and brought me to tears. So I started playing with my new word for the year and it fit in so many ways.

You can read more about what I thought was supposed to be my one word, Delight, here. And here’s my post on what my word for 2020 actually is, Be. But let’s talk about my 2019 word, Grow. 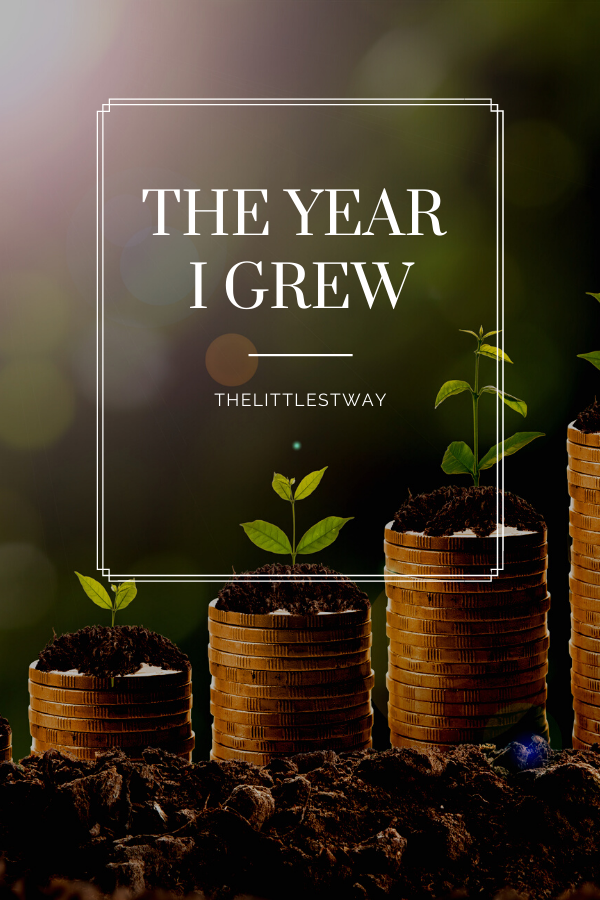 First, there have been many, many years where the year progressed or dragged on depending on the circumstances, my one word just kind of faded into the background. The beginning of 2019 kind of felt like my one word grow was nice and all, but wasn’t really going to make a huge impact in my everyday life.

Of course, I won’t share all the ways I’ve grown over the past year, so much of it was quietly…well, sort of, only voiced to a couple of people. It was also done in conjunction with the stories of others and so much of that needs to remain private on my end. It was also extremely painful…extremely, one of the more painful years I’ve experienced. So painful in fact that I’d like to say, “I came, I grew, I left…and 2019 be all like, “But did you die?””

So many of these growth spurts as I call them, that I lived through this past year, well, I’d be ok with not revisiting them in great depth and detail. Some of them almost feel like, “I’ve made it through them once and I’m not sure I could make it through a second time.” Again, yes, that painful.

But let me start with a fun fact about my year of growth, I grew an inch. Yes, at 47 years old, I grew an inch!!! There are a couple of reasons for this surprising growth. Wait, let me tell you, on January 1st when it was my turn to be measured with the rest of the family on the door, I said, “I’m just hoping to hold steady.” Friends, I surpassed that goal of merely holding steady. I grew an inch!!!

I believe my literal growth spurt, one that could be proven by a sharpie mark on a door, was caused by two things: first, working out and second filtering influence.

I started consistently working out five days a week beginning June 1st of this past year. I started following a plan my son’s assistant soccer coach made for the boys; well, not the exact plan, I asked him to tweak it for me and he graciously agreed. The workout program he tweaked (and I tweaked even more in some places) is a combination of “Gym” which for me looks like is lifting a barbell or dumbbells at home. The other part of the program is “Fuse” which is a series of exercises, repeated and done as fast as possible. For example, one of my fuses might have 10 squats, a 1-minute plank, 10 pushups, 10 burpees, and a short run from my driveway to my propane tank. I would repeat that series 4 times.

Now, I also think and believe that working out added to my stature as well because I feel better and more confident, surely that has got to make a person grow right?!? When we feel better–more confident and stronger, we are going to stand differently.

The other factor I believe added an inch to my height was considering the influences I allow in my life. And this one ties into the second part of the working out. Starting in the summer I began to pay closer attention to the people I allowed to have and hold influence in my life. I even ranked their influence on a number scale of 1-5, 1 being a poor influence and 5 being a great influence.

I did this quick little exercise to figure out how much influence someone had in my life and whether it not it was a good influence or not. I thought of the five people in my life who had the most influence in my life–good or bad. I ranked their influence on the numbered scale of 1-5, added the numbers up and divided by 5 to get my average influence number. I know, not super scientific but extremely helpful!!

The first time I tried the influence scale, my average number was a 3. Next, I replaced a poor influence with a better influence and my number immediately rose by one point. And as I’ve already mentioned, when we feel better about ourselves; stronger and more confident, we’ll carry ourselves differently. In my case, I carry myself a whole inch taller when I stopped letting negative influences beat me down or hold me down, literally.

Other ways that I’ve grown this past year include a greater sensitivity to joy and sorrow–a fancy way to say I cry a lot now. Shifting the negative influences in my life to the edges has allowed me to laugh and be silly more. This has increased not only my overall joy but also that of my family.

I’ve worried less and praised God more as I’ve grown this past year. I’ve worried less about what my faith is “supposed” to look like and spent more time just being with God. I read the entire Bible this year (again), made a few monthly Praise and Worship Spotify playlists, and completed various Bible study plans on YouVersion. These were all efforts and invitations to keep God as the focus and in focus as much as possible.

I’ve grown closer to God as I’ve lived a year without my grandma, through a Melanoma in Situ diagnosis and plastic surgery. I’ve relied on God through trials and broken relationships, misunderstandings and things I don’t understand.