I’m pulling from Reflections on the Passion once again for this Lent Devotional for Women post. The topic of consideration this time is Pilate. Poor Pilate. It had to be someone right?

The author of the book makes the point, “There is something of Pilate about all of us. Despite our avowals that we are followers of Christ–Christians–do we not all too frequently act against our convictions, and do we not fail to do the upright and noble thing because we fear the mob or because we have a servile love for human applause.” Let’s dig deeper into this for our Lent Devotional for Women today. 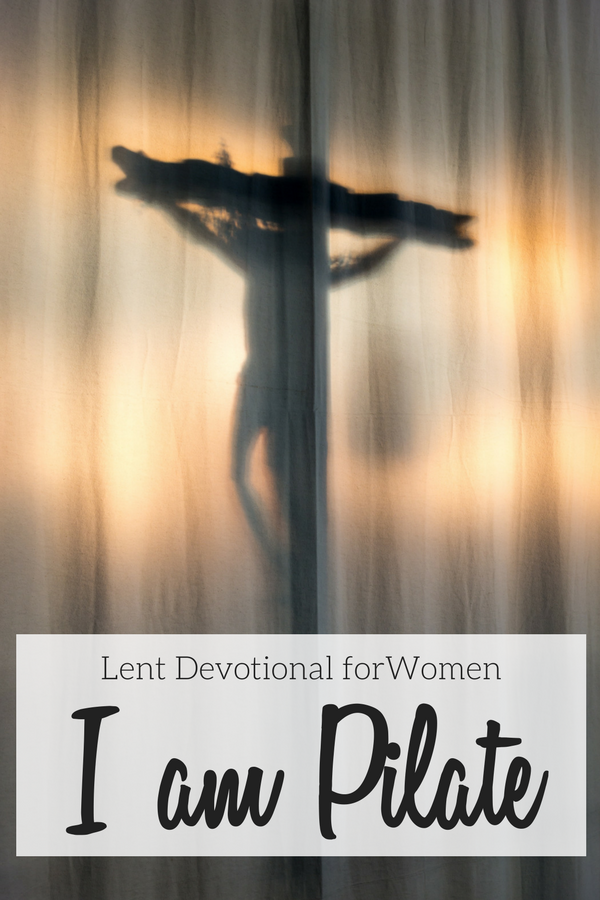 Ugh, we’ve all been there right? The holiday get-together, the sports sideline, the office, the mom’s group, the Bible study…when someone says something so out of left field about the faith and we know, we know not only can we correct them, we need to.

If you’re anything like me, your first reaction is along the lines of, “Really God? Not here, not now. Look, You know as well as I do, this may not go well. How about I just wait for a minute and maybe someone else will step in. Someone more qualified and better with words, and feelings, and life in general.” We’re a Pilate.

Pilate tried everything to pass the buck. He didn’t want to be the one to make the judgment. First, he told the Jewish leaders, “Take him yourselves and judge him by your own law.”

Next, Pilate in a roundabout way, asked Jesus what he should with Him–this guy was seriously searching for a way out of having to take a stand. Pilate’s next attempt to wiggle out of making a stand was when he went out in front of the crowd and told them, basically, he didn’t know what to do with Jesus and he’d rather not make a decision so why don’t they decide.

The crowd made a decision all right. And I have to wonder if Pilate wasn’t a little bit mortified at their decision.

There’s Pilate, standing there listening to the crowd practically beg for a known criminal to be released over Jesus. He must have looked over at Jesus–and thought how “tough” Jesus must have looked at this point in His Passion; He’d been up all night praying and sweating blood, chained, drug from place to place, tormented, beaten, spit on, hair and beard pulled…Pilate must have thought, “You’ve got to be kidding me!”

Still trying to get out of it, Pilate had Jesus scourged to a blessed and bloody pulp! Look, Pilate knew his men and he knew what they’d do to Jesus. He figured, surely seeing a man almost beaten to death would get him out of this. Nope.

Then, Pilate brought Jesus out so the crowd could see Him. He was probably thinking surely they would be able to see Jesus couldn’t cause an uprising or take over a kingdom; He could barely stand! Pilate figured seeing Jesus completely and outwardly impotent would settle the crowd. Wrong.

The crowd went wild with their bloodthirsty cry to crucify Jesus! Pilate told them to crucify Him themselves. At that point, Pilate was surely thinking, “What do I have to do to get Him taken off my hands, to make Him someone else’s responsibility.”

The story goes on from there and I’m sure we’ll visit it sometime this week, the point is, how often are we Pilate? How often do we try to do nothing and at the most, pass the buck?

No one wants to be the one. You know the one people say is too religious, holier than thou, too big for their britches, judgemental, un-Christian, uncharitable, etc.

But sometimes God calls us to be the one. Sometimes He calls us to be the ONLY one. The ONLY one who will defend His Word on marriage, life, and living as a Christian. And dang if we don’t try to find some other way!! Except for a few, and those few are ready willing and able to take on the world single-handedly, both barrels blazing! But the rest of us would rather…

If God is calling you to be the one right now, pray. And honestly, we should always pray and be in the state of grace because we don’t know when and where God may call us up to bat for Him. I wrote a post a while ago about Fraternal Correction that has some guidelines you might find helpful when the times comes–not if the time comes.